If You Have Ever Wanted to Travel Through Time,
Here's Your Chance!

Come to Socorro, New Mexico, to visit sites associated with World Wars at White Sands, and civil wars at Ft. Craig, mining and ranching booms and busts in Magdalena, Native American revolts triggered by the arrival of, first, the Spaniards and then other Europeans. Travel the great El Camino Real that was the path of commerce and cultural exchange between Native Americans, and later, Europeans. Tour the remains of millennia of Native American pueblos and cliff houses and see in their petroglyphs the evidence of their activities and of ancient wildlife. That wildlife can still be seen in the annual arrival and wintering of sandhill cranes, snow geese, and other migratory waterfowl who have inhabited the area longer than man has.

After the first traces of man and animals and plants have vanished in the dust, follow the Quebradas Back Country Byway to see the evidence of the changing Earth over 250 million years into the dim past in the exposed layers of sand and stone in hoodoos, buttes, and canyons.

And if all that isn't enough for the most ardent of history buffs, you can go beyond the "dim" past to the "invisible" past at the Very Large Array radio observatory in Magdalena, where scientists seek to uncover the history of the universe on a billion-year scale!

The links below will take you to specific information about these attractions as well as many other opportunities to experience the arts – audio, visual, and culinary-inspired by this great region.

Be sure to visit the City and Chamber websites for up-to-date event listings. 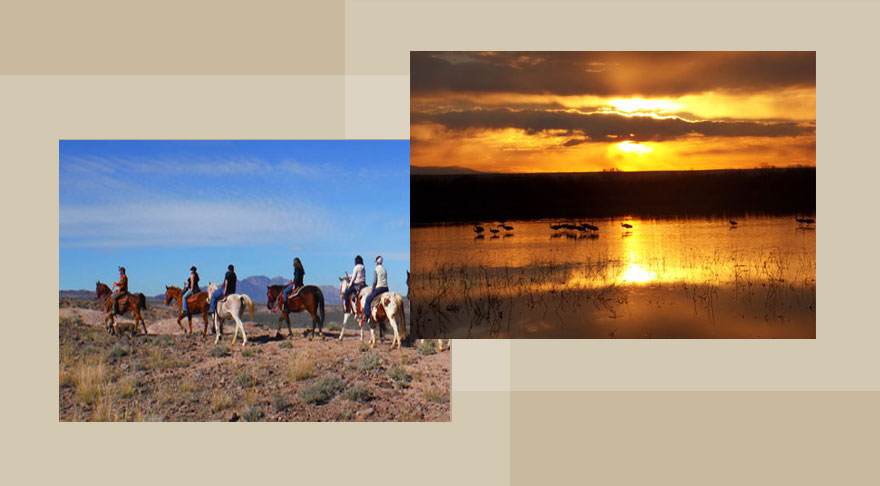 Just Out The Door: